In 2016, five Dutch and five Burkinabe water authorities set up the joint programme ‘Faso Koom’ committed on capacity building for improved integrated water resources management. One of the themes of this programme is impact reduction of artisanal and small scale gold mining (ASGM) on the water system. ASGM is the main source of income for about 1.3 million people in Burkina Faso - an economy worth about 125 million euros/year. While it benefits the economy, gold mining has disastrous consequences for the environment, including the water system. Large amounts of mercury and cyanide end up in the environment. This article highlights the environmental and health impacts of ASGM and the importance of the sustainable use and management of water resources.

The threat mining poses to the precious and scarce water resources in Burkina Faso has become a major concern for communities, NGOs and governmental entities. Access to clean water is of high importance. Negative impacts on water directly cause problems to the safety for human and animal consumption and the health of ecosystems. Rural communities in particular are vulnerable to water issues due to a combination of water scarcity and limited economic and institutional capacity to deal with possible dangers of water contamination. Mining companies and artisanal miners rely heavily on water resources for the production of gold. Artisanal miners use water for washing of gold  concentrates. Motorized pumps are used to transport water to areas lacking streams or running water, and to lower the groundwater table in the pits to allow access to the gold containing minerals. By using pumps, water is discharged with a high sediment content which can affect the quality of rivers and land plots. Even more alarming is water pollution caused by the chemical treatment of gold concentrates.

The vast majority of the artisanal miners in Burkina Faso use mercury to extract gold and silver from ore, a simple and inexpensive method. Gold is a soft and heavy metal that dissolves well and quickly in mercury and with it forms amalgam (a mixture of mercury and another metal). Due to its heavy weight, gold amalgam is easily separated from gangue i.e. the worthless mineral. The gold amalgam, which looks like a paste, is then heated on an open fire. During the heating, most mercury evaporates leaving behind a semi-pure “sponge gold”. The nuggets (see fig. 1) are then sold to gold dealers.

Figure 1: Sponge gold in Burkina Faso. Photo taken by the author in July, 2018

During the ‘burning’, mercury is released into the atmosphere from where it can be inhaled directly by miners, bystanders, and deposited in the immediate environment where it gradually penetrates into the water system. Once in the environment, stable elemental mercury can be converted into organic mercury i.e. methylmercury (CH3Hg+), in the presence of microorganisms. It accumulates in aquatic organisms and through them enters the food chains. 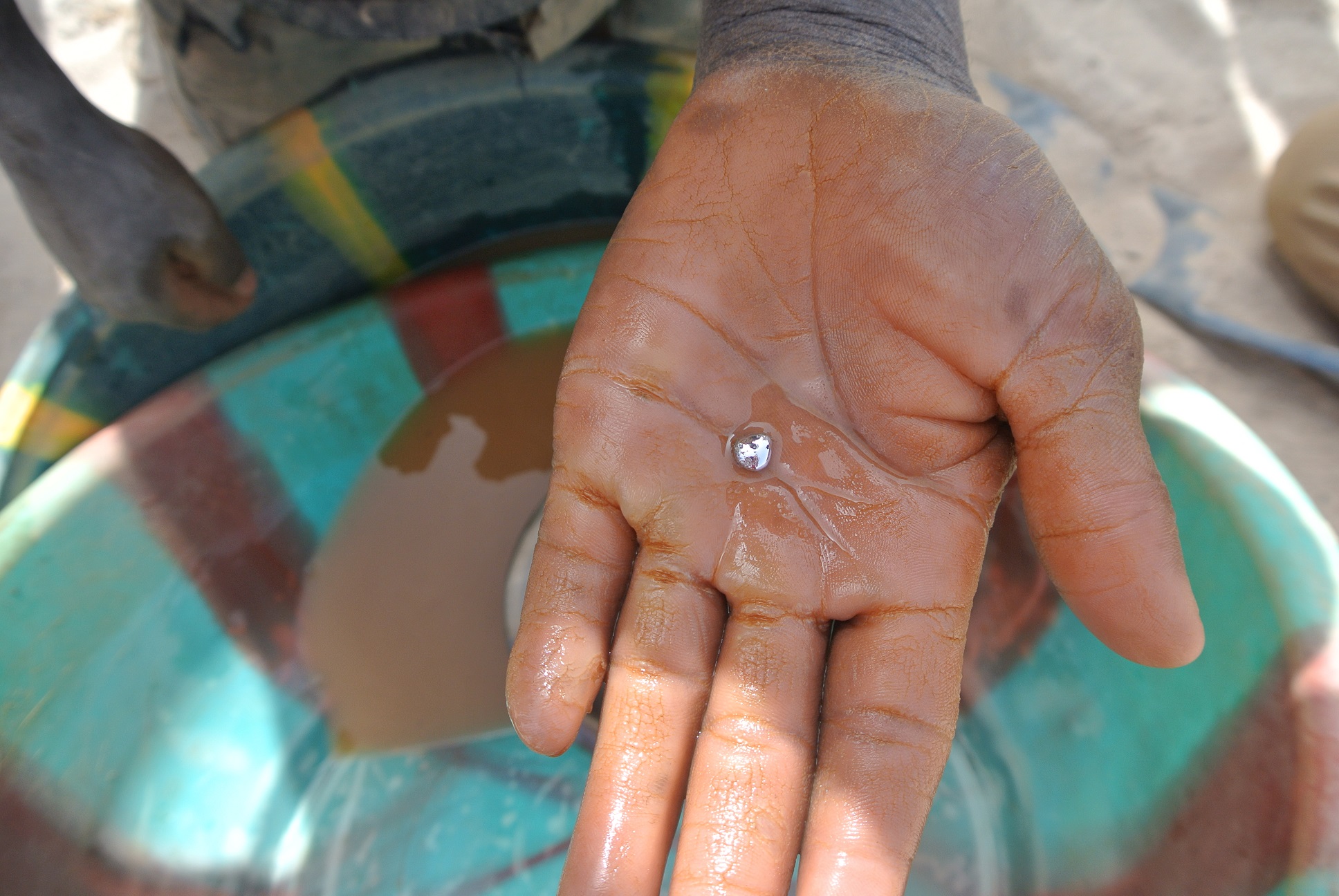 In Burkina Faso’s mining sector, significant amounts of mercury are being used. About one gram of mercury is needed for every gram of gold. Mercury releases in Burkina Faso are some of the highest levels in Africa. It is estimated that artisanal and small-scale miners use approximately 35 tons of mercury each year, most of which ends up in the environment. On a global level, we are still polluting the air with mercury emissions of around 2.000 tons annually.

Research on the environmental impact of gold mining in the Poura region in Burkina Faso carried out by a consortium of Burkinabe and Dutch Water Authorities has confirmed that drinking water sources and the soil in this area are heavily contaminated with mercury and other heavy metals. Levels of mercury exceeding the WHO drinking water standards have been found in drinking water sources, including community wells and a water point at a school used by hundreds of children. It also shows monitoring of water resources in these areas is inadequate and little is done to address water issues and soil pollution. Often the local population, including the mine workers, are not aware of how extremely burdensome mercury compounds are on the environment and hazardous to human health.

In addition to amalgamation, ASG-miners recover gold from ore or tailings, including those from amalgamated concentrate, by leaching (extracting substances from solids) with cyanide. Using cyanide allows higher rates of gold to be recovered from the mineral concentrates. This is commonly done in remote areas at a certain distance from mining sites to avoid prying eyes. Even though risks related to cyanidation are easier to manage, artisanal gold mines often fail to take safety measures into account and knowledge on safe use is often insufficient. Cyanide is highly toxic and can result in significant environmental impacts and public health risks if released into the environment. Several cases have been mentioned where valuable livestock of farmers died from cyanide poisoning  and numerous fish have been found poisoned after cyanide spills. A mining site in Poura by state-owned mining company SOREMIB was closed in 1999 and left heavily polluted. No measures were  taken to protect the population from the dangers of the chemical substances.  In 2014 the Mouhoun water agency installed a wall around dump site of contaminated soil in order to mitigate the risks; however, this measure is not sufficient. There is no geomembrane underneath this site, meaning contamination can infiltrate directly into the soil and groundwater. 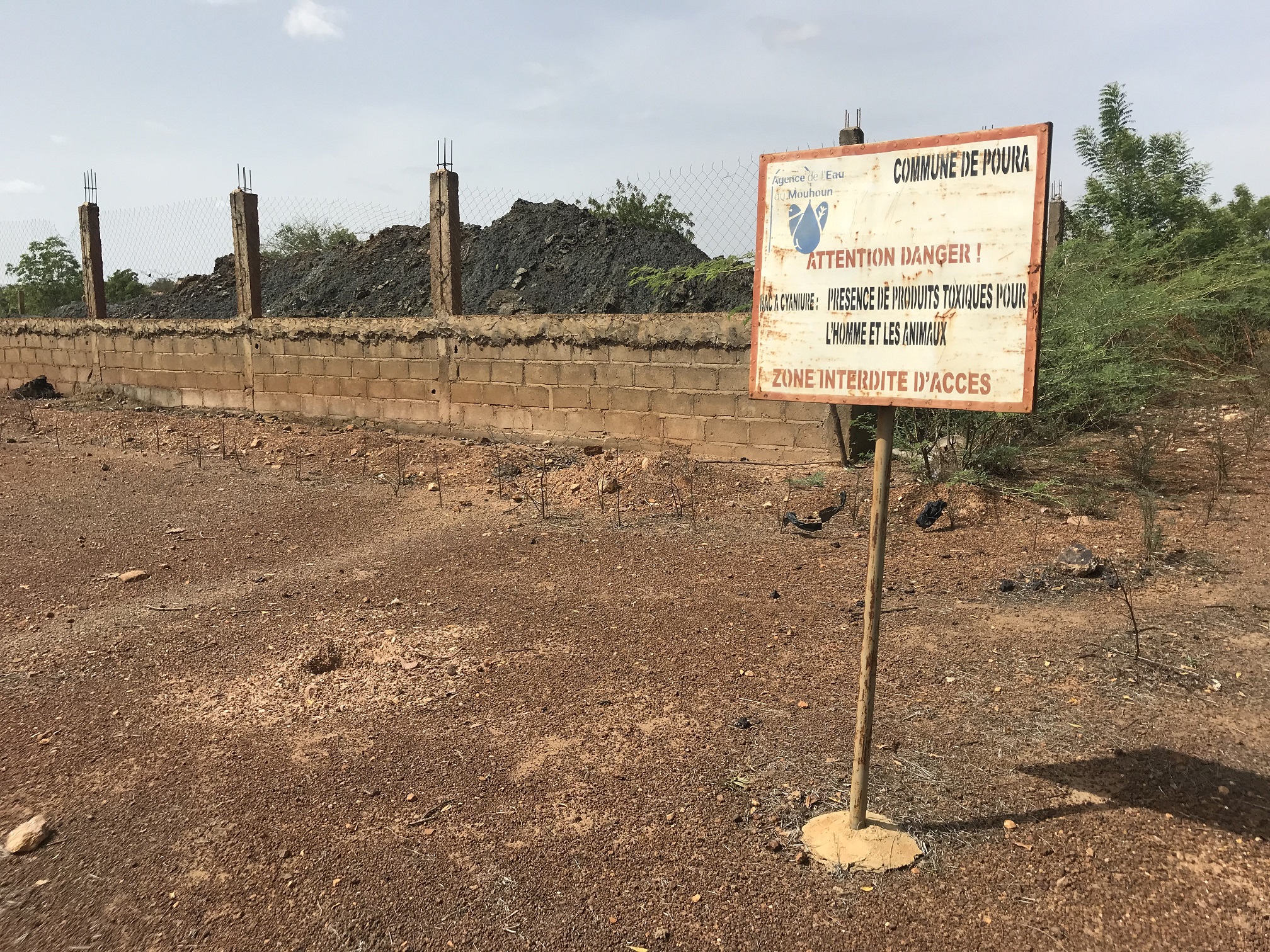 In 2016, the Burkinabe government adopted the Minimata convention, which prohibits mercury use for processing ore. Also a National Action Plan on Mercury in the Artisanal and Small-Scale Gold Mining sector in Burkina Faso is being developed. These are very good developments helping to reduce the use of this hazardous chemical, however, it is not nearly enough. Mining will continue as long as the demand for the precious gold remains. Therefore it is  very important artisanal miners get access to mercury-free techniques, which should be facilitated by the government through technical, legal, organizational and financial support programmes.

The Dutch and Burkinabe Water Authorities have started a programme on integrated water resources management in relation to artisanal gold mining in Burkina Faso called GIRE-OR (la gestion intégrée des ressources en Eau en relation avec le secteur aurifère). The overall objective is reducing the impact  of ASGM on the water system by creating awareness, knowledge exchange, capacity building and through licensing and enforcement. This objective will be achieved by organizing workshops to train miners on ASGM best practices, assisted by the training module developed specifically by GIRE-OR to address the Burkinabe situation. As part of GIRE-OR a partnership between Ministries, NGOs and miners has been established and work is in progress to formalise this public-private partnership (PPP). Faso Koom believes PPPs accelerate the transition from quick and dirty gold mining to environmentally sound and socially responsible mining. 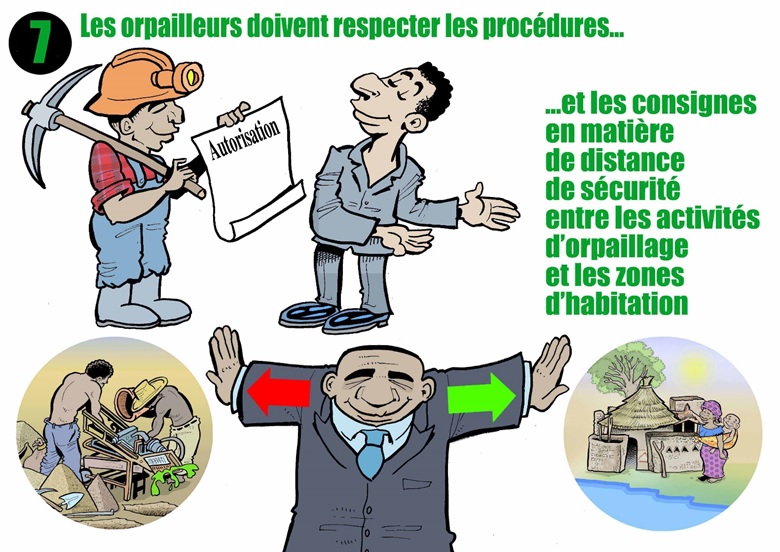