World Waternet experts on prime-time television in Laos and Mali

Waternet experts are doing awesome things in World Waternet projects worldwide. But now it seems that even the local media is picking up on it. This month, Waternet experts appeared on television in Lao PDR and Mali.

A few weeks ago, Koen Maathuis, Regional Manager for World Waternet and permanently located in Bamako (Mali), officially opened the Female Leadership Masterclass. This Masterclass was organized by the African Water Association and the Dutch program WaterWorX. WaterWorX is a cooperation between the ten Dutch water companies and local water companies, and aims to provide drinking water to 10 million people around the world, who are now still without access to an improved water source.

The WaterWorX program placed gender equality high on the agenda. Within the WaterWorX projects that World Waternet is leading, we try to promote a strong position for women in the local partner organizations we collaborate with. The Female Leadership Masterclass took place at the beginning of May and comprised of a group of 37 woman from a variety of African countries, 7 of these women are involved in WaterWorX projects (three from Malawi, two from Kenya and 2 from Tanzania). During the Masterclass, the participants worked on improving capabilities, such as communication skills, but also shared experiences amongst themselves. How can you make fully use of your talents and exercise influence on your environment, an environment that may not be used to that? How do you combine work and private life? Cultural differences and languages barriers melted away quickly, as the women rapidly discovered that they have so much in common. The Masterclass took place at our Malian partner SOMAGEP, an organization that is actively promoting women’s position and has even set up a Gender Team that is safeguarding this. Our Regional Manager Koen Maathuis officially opened the Masterclass and give a speech about the importance of gender equality from the perspective of the WaterWorX project with SOMAGEP. The footage below shows Koen in action! You will quickly recognize him by his distinctive black glasses and blue jacket (0:17 min). 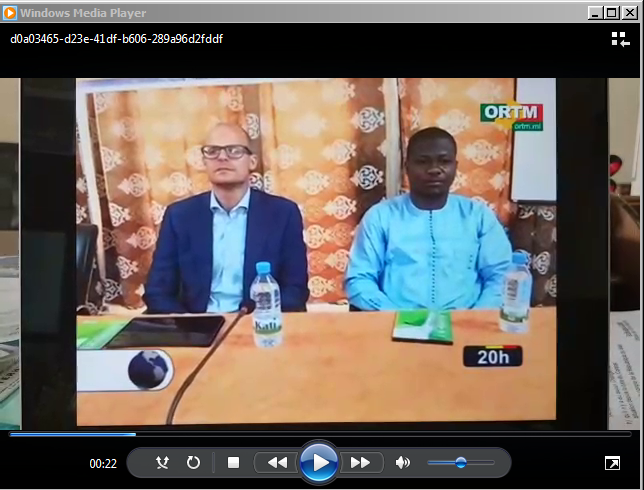 Click on the image to check out the video

Timon and Arjan on Lao television

And then the other television appearance, a part of a whole other project on another continent. Timon Knigge, project manager of the WaterWorX project in Lao PDR and project team member Arjan Sierveld, are successfully working on the improvement of GIS (geographic information system) in Lao PDR since two years. This system is designed to capture, store, manipulate, analyze, manage, and present spatial or geographic data. Very useful for water operators to manage their water resources and hydrological modeling. They started with two provincial water operators two years ago, and due to the progress they made, now 10 more provinces joined up! Last week, they provided trainings to GIS specialists of all the joining provincial water operatos. A big event that the provincial television of Champasak picked up on! In the footage below, you Timon giving an official speech, and Arjan sitting amongst the Lao GIS specialists. 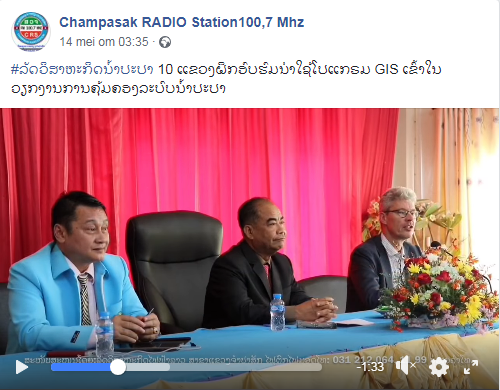 Click on the image to check out the video.

We are proud of our ‘celebrities’!