Ruth Wijland participates in the Young Expert Programme (YEP) and is working for World Waternet at our Malian partner SOMAGEP-SA. Find our more about her experiences in Mali.

I was told what to expect arriving at Bamako airport. It would be warm, it would take a while and the cash machine would probably not work. I was lucky. The air conditioning worked, so the temperature was nice. Thinking that it would take ages, the waiting time in comparison is short. So the waiting was actually quite relaxing. And I could withdraw as much money as I liked. When I walked out of the airport, Thierno, my YEP colleague who also works at SOMAGEP-SA, was there to pick me up. All-in al, it was a really nice start of my time in Bamako.

During my first week, oranges showed up everywhere at the office, at Hadi’s place and at her in-laws. Hadi is another YEP colleague of mine working at SOMAGEP-SA. When I got home, I ate the oranges that Hadi had given me. They were delicious, tastier than the ones we have in the Netherlands. I am really grateful for the warm welcome and all the oranges that came with it. Writing this I realized I actually do not have a picture of these oranges. So imagine them. They are quite similar in shape to the Dutch ones, but a light yellow colour with some green.

My upstairs neighbours were really welcoming as well. In my second weekend I joined them on the Hash. The Hash is a hike on Saturday’s organized by a group of volunteers. I was a little cautious in advance. March is the start of the hot season. So, from the day I arrived it had only gotten warmer. We had to drive for over an hour to reach the outskirts of Bamako. A nice walk along the river was promised, so I was really looking forward to it. The start of the walk was quite dusty. And even at the end of the day the sun was still shining brightly. It took a while before we reached the river and the shade. By that time, my face was the same colour as the red dust on the ground. Along the way, we passed a lot of people. This gave me the opportunity to practise my few words Bambara ‘I ni ce’, which means hello. Unfortunately, we took a wrong turn and did not walk along the river for long. However, we finished the walk at a really nice spot and had a cold drink. Just before we left to go back, we could enjoy the sunset.

SOMAGEP-SA had a celebration of International Women’s day on the 13th of March. Because of this, I had plenty of time to get myself a dress. With some help, I found a dressmaker, who came to my house to take my measurements. He talked a really nice blend of Bambara and French, like more people in Bamako. In the end he understood what I wanted. The dress was delivered two days later, on Thursday, and fitted perfectly. I fitted in with the others joining the celebration and even had a photo-shoot with Aboubacar, Thierno and Hadi. Also, during work it feels like we are a unity, like on the picture. 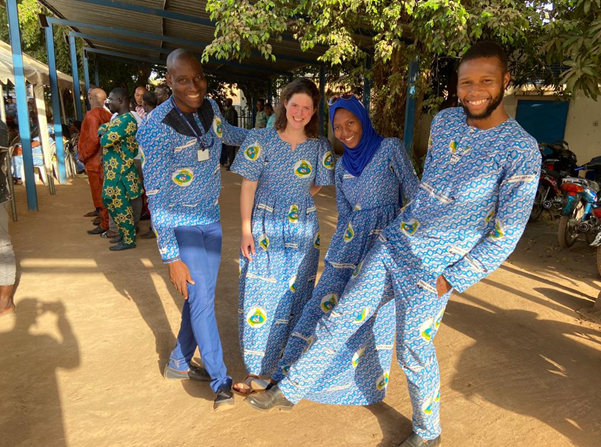 And then, after being in Bamako less than a month, the unexpected happened: COVID-19 emerged. Writing this blog in the Netherlands is not something I expected. There were quite some scenarios I considered. Covid-19 was not one of them. I had to leave Bamako for now. Hopefully, it will not take to long before I can write another blog about the rest of my experiences in Bamako. 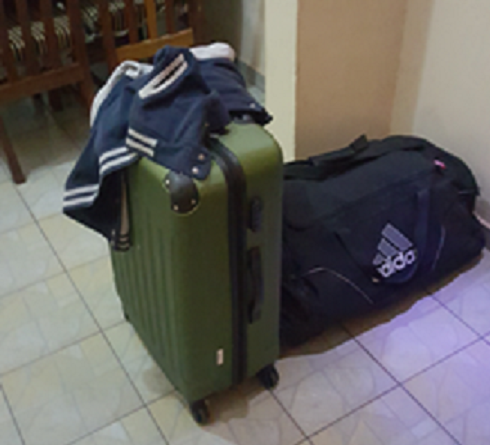