Take any indicator you like – life expectancy, GDP, literacy – and Burkina Faso dangles near the bottom of the rankings. Eastern Burkina, with her capital city Fada n’Gourma, is among the least developed parts of the country. In this region 65% of the population has access to drinking water and 14% has access to sanitation. Access to clean drinking water and sanitation (declared as a human rights since 2010) are therefore one of the biggest concerns of the government and its partners in this region. Working for regional water authorities, the mission of Etienne Nacoulma and I is to help improve integrated water resources management. We do this by enhancing the water systems knowledge of water operators and by improving cooperation between stakeholders.

One third of the dams are in dire need of maintenance

A key task of the regional water agencies is to protect the water resources. Due to the absence of permanent rivers in eastern Burkina Faso the population is dependent on surface water, retained in more than hundred reservoirs (referred to as barrages) and thousands of wells (forages), which give access to groundwater sources. Most of the barrages were constructed by various organizations and international donor aid in the 70s and 80s during an extreme period of drought that affected West Africa. However, these projects were lacking a good plan with regard to the maintenance of the barrages. As a result many dams - essential for the water supply and socio-economic development - are in very poor condition right now. In December I went on a mission to identify the state of barrages in the eastern region. It turns out that one third of the dams (16 in total) are in dire need of maintenance and 35% (18 in total) of the barrages are in such a bad state that they have to be reconstructed. 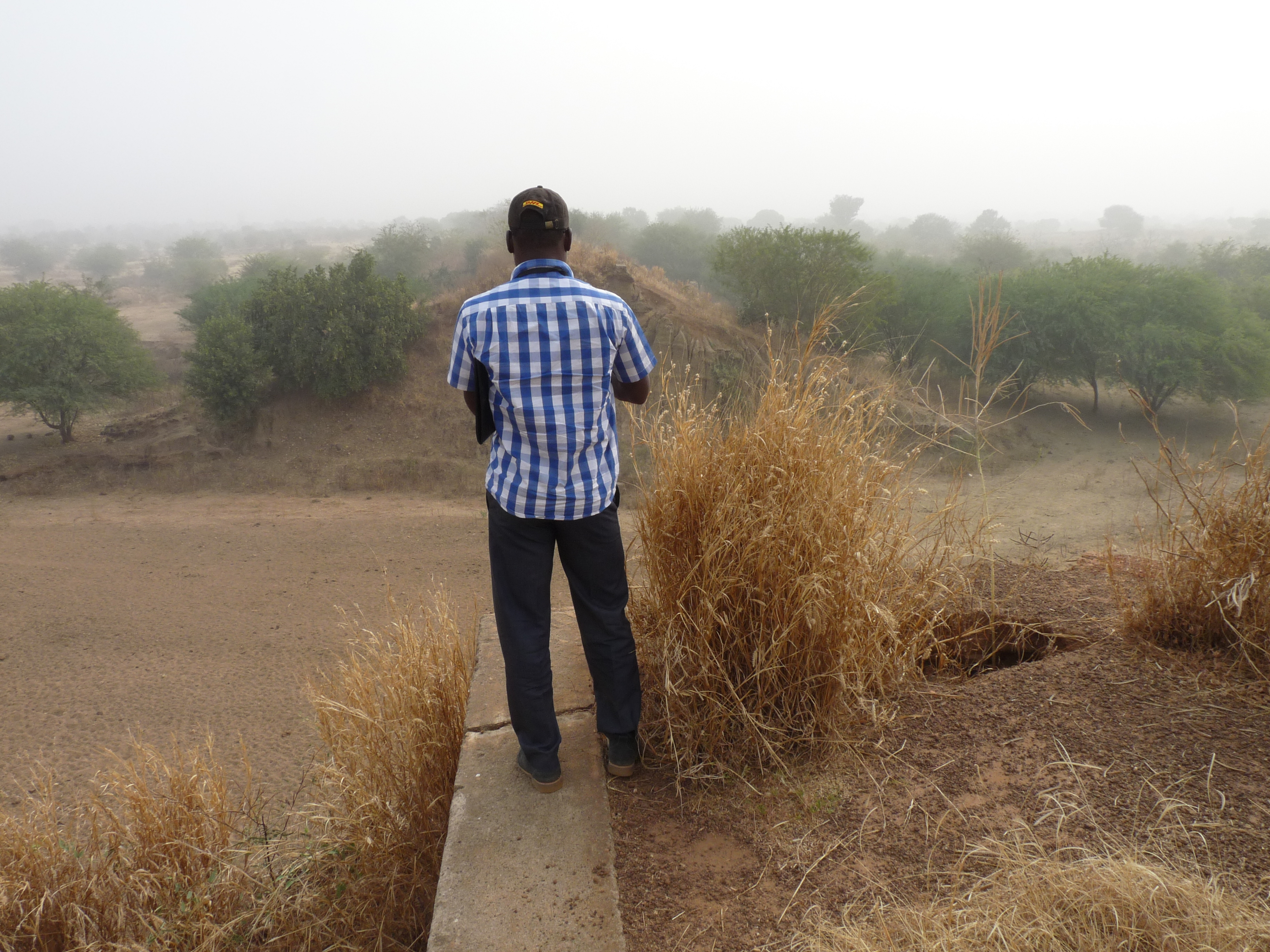 Dike breach of a barrage in eastern Burkina Faso

The regional water agency Gourma (AEG) has started a program to monitor, maintain and renovate essential barrages. This is done in close cooperation with the local population. Good examples are the rehabilitation of the barrage in Dargo and Bulsa. In Dargo, the AEG has implemented a program with a capacity building approach. People from the local community have been hired by the water agency to strengthen the dyke and to construct a stone barrier around the barrage. The stone barrier acts as a sand trap and at the same time it marks a protection zone. Within this zone no agricultural activities are allowed. Due to this new zone farmers had to move further upstream. To compensate for the expenses, the famers were given fruit trees that have been planted within the protection zone. The farmers literally reap the fruits and simultaneously it contributes to reforestation which has a positive effect on the microclimate around the reservoir. 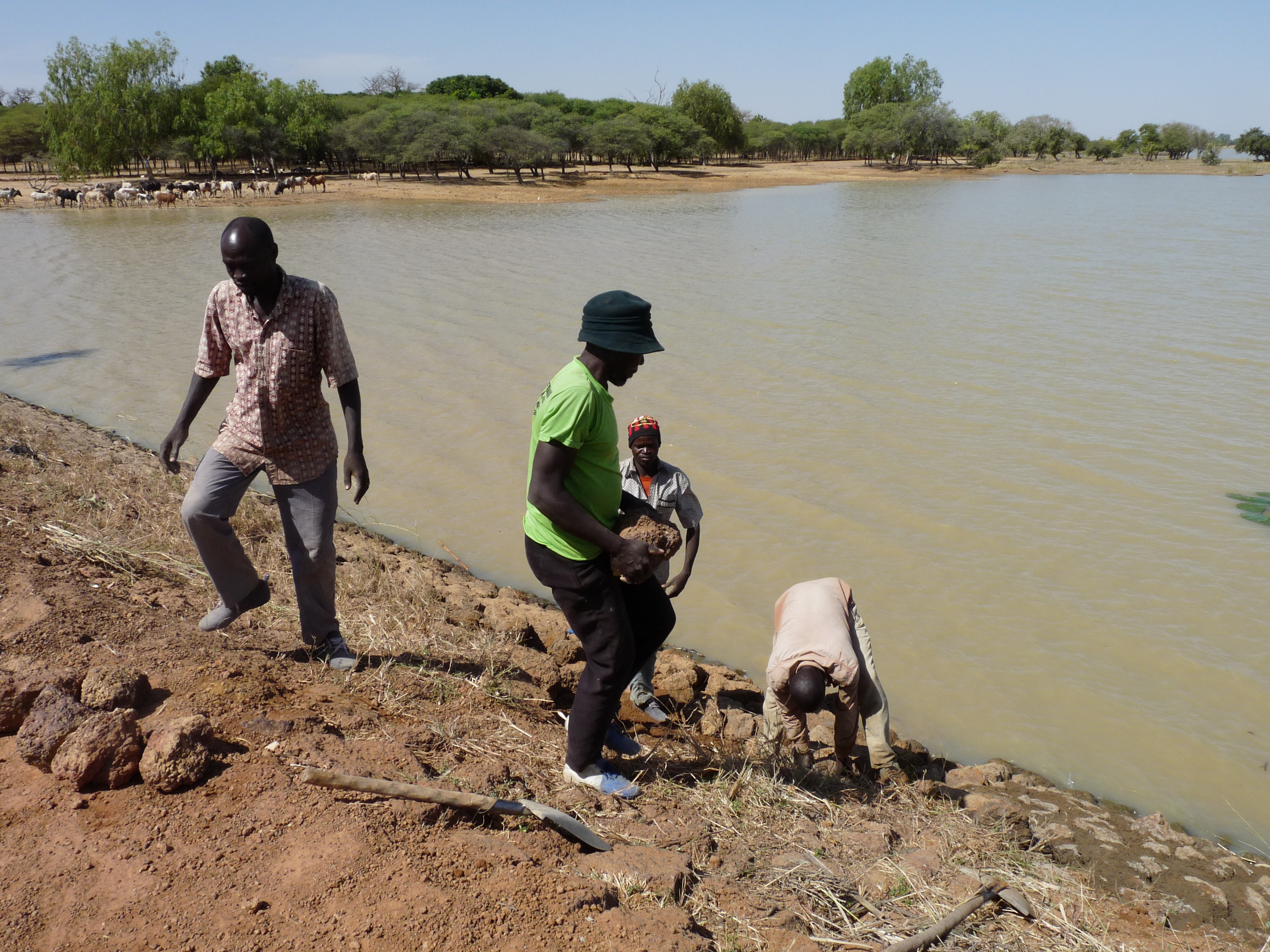 The barrage in the city of Bulsa has lost significant storage capacity due to sedimentation caused by erosion upstream. The regional water agency Gourma has investigated the feasibility for excavating this silted barrage. The results were presented during an engaging discussion at the town hall where all villagers were welcome to ask questions and to make comments. Erosion was mentioned as an important problem.

Intrigued by this interesting study I was wondering whether there are sustainable solutions to reduce the impact of sedimentation upstream. The excavation of about 20 Olympic swimming pools of sand, which has to be repeated about every 20 years, is a costly affair. It would be very beneficial from a financial point of view if the sedimentation rate can be significantly reduced. I discussed this matter with the consultant and asked if he was familiar with the technique of ‘sand damming’. These are low dams (barrages) constructed on ephemeral streams whose purpose it is to capture sand and create artificial aquifers used to store storm flows. The technique was new to him and he was very interested to learn more about it. Thus, I translated a number of articles into French and sent them to the consultant. A few weeks later, the feasibility study was published and, well, the new technique was included in the recommendations. Wonderful that I could contribute in this way and that the experts are open and receptive to new ideas and techniques. Who knows maybe a first sand dam will be realised in eastern Burkina Faso soon!

Apart from the protection of water resources an important task of the water agencies is balancing the interests of water users and to apply and enforce legal rules relating to water usage. In order to answer more needs expressed in terms of access, quantity and quality, it is essential that all actors join forces to meet the challenge of exploiting the water resources in a sustainable manner. Besides governmental entities there are NGOs, consultants, research institutes and financial partners that play an important role in this arena. Although many parties are doing complementary work there is still far too little cooperation. Through better coordination, knowledge exchange and mobilising support a lot of progress can be made. This was exactly the aim of the four days water fair that was organized simultaneously with World Water Day in Fada n'Gourma. Normally any major water event happens in the capital city Ouagadougou, but for the first time in history two NGOs: Barka Foundation and Initative: Eau, have managed to launch a major water fair in a region where water issues are most prominent.

Initially, the invitation to participate in the event was not accepted by the Water Agency Gourma. However, good contacts of Etienne and I with the NGO’s and a positive pitch for the management team ultimately resulted in our participation in this event! The four-day fair featured a parade, exposition, congress and cultural activities. The primary goal of the fair was to focus on the water needs of the end-users, most importantly, the population. The fair was supported by the First Lady of Burkina Faso, the U.S. Ambassador, the Minister of Water and Sanitation, the Minister of Mines and Quarries and the Governor of the Eastern Region. The local population was mobilized from the first day when hundreds of people including school children, students, associations, women’s, NGO’s and governmental organisations participated in a Walk for Water, raising awareness for the water issues in the eastern region. 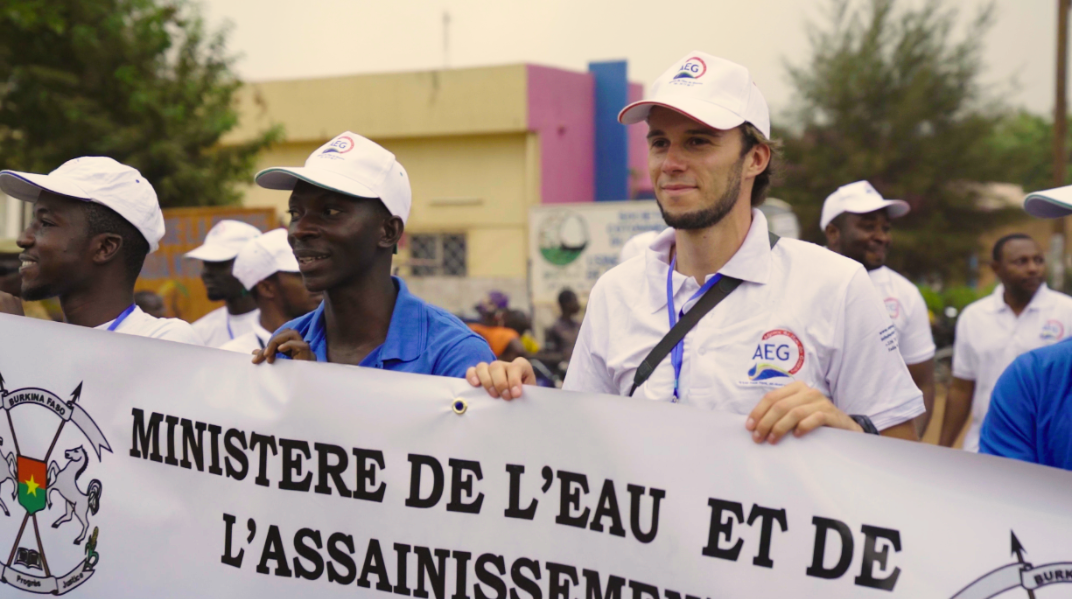 Union square, in the city centre, was transformed into an exhibition, which allowed participants to promote their activities, sell water related products and interact with visitors and stakeholders. Many interested locals visited the colourfully decorated stand of the regional water agency Gourma where we provided information of our core activities. This was done in an interactive way by showing videos, illustrations of good practices, distributing leaflets and doing quizzes. The general manager visited the stand after the opening ceremony in company of ministers and other key players in the water sector after which she gave an interview that was broadcasted on national television (la Radiodiffusion Télévision du Burkina). 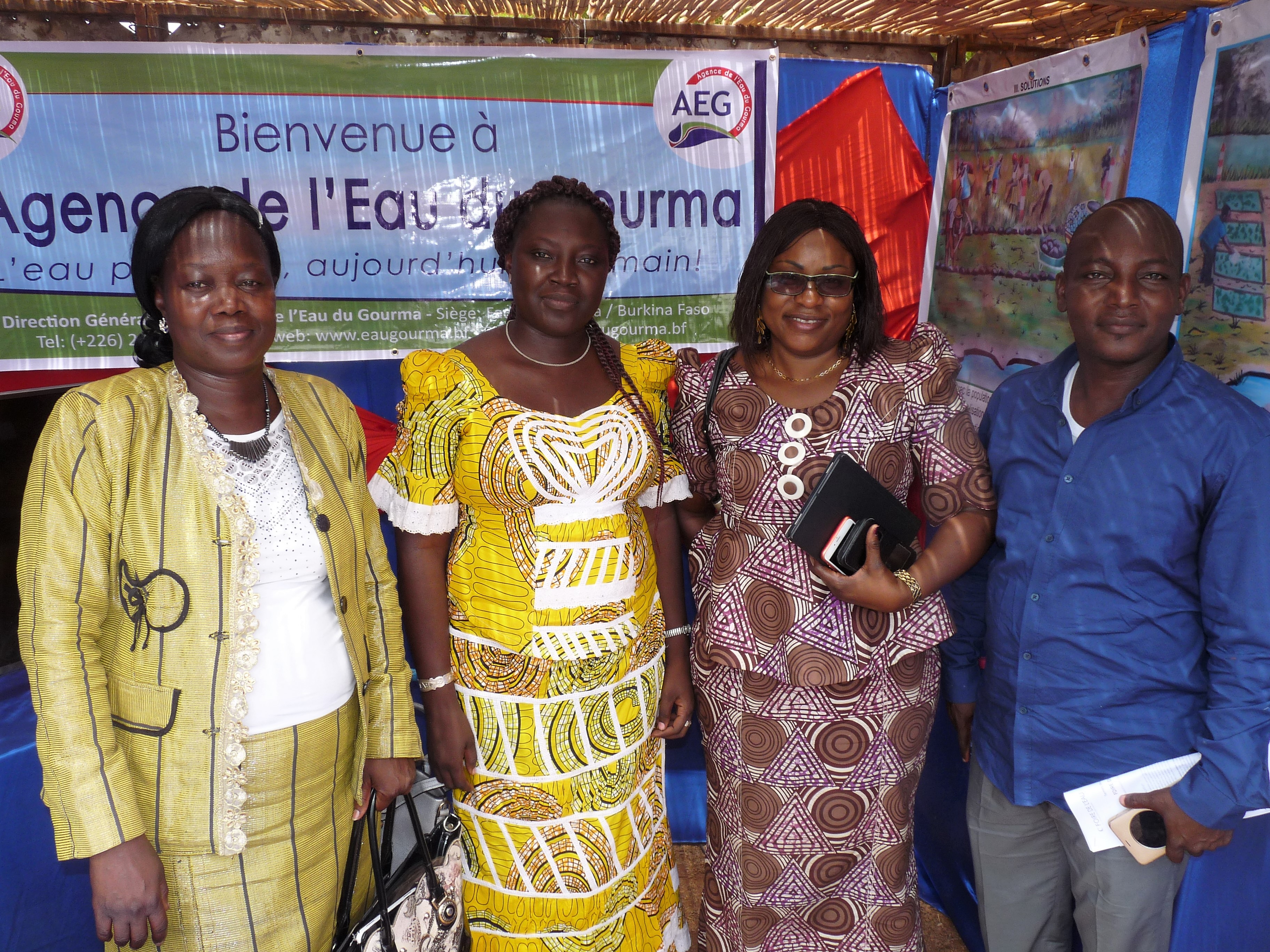 From left to right F. Bationo (Director of the Gourma regional Water Agency), Ms. Traore (Technical advisor of the Ministry of Water and Sanitation), N. Antoine (Head of the department development at the permanent secretary of Integrated Water Resources Management)

At the three-day congress, governmental entities, NGOs and companies presented their water related projects in order to share good practices and experiences and creating alliances. The regional water agency Gourma gave three presentations. Etienne and I kicked off the session with the theme 'Water and Climate' by giving a presentation about the results of a hydrological research that I carried out in 2016. The research provides insight into the effects of population growth and climate change on the water availability of the Tandjari barrage; the most important source of drinking water to the residents of Fada n'Gourma. The presentation led to an interesting debate. We received positive feedback of, among others, the CEO of the Directorate of Studies and Information on Water, regional director of ONEA and the technical advisor of the Ministry of Water and Sanitation. In the second session on Water, Territories and Ecosystems, Florent Kabore gave a presentation about the Financial Contribution for Water (CFE), which comprises the introduction of a tax system based on the polluter pays - and the user pays principles. In the last presentation, Mr. N’DO addressed the issue of deteriorating water quality of resources due to pollution. 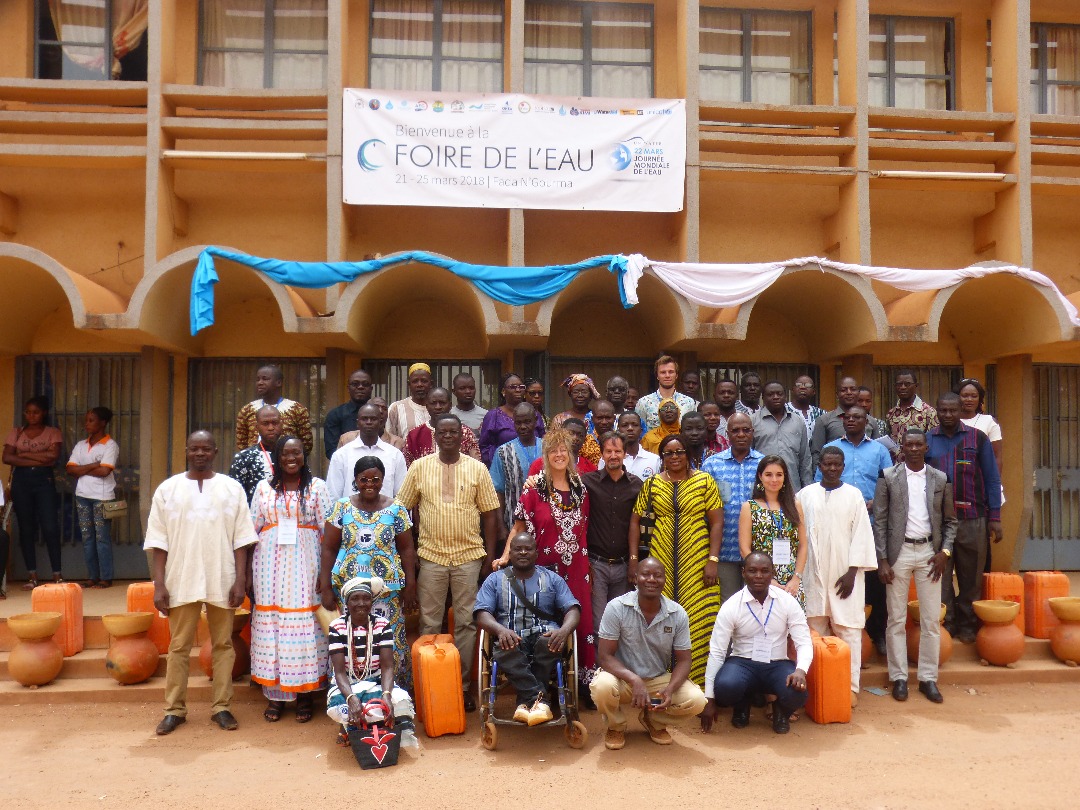 Giving the floor to all actors

The water fair was successful in not only bringing together exclusively powerful managers but to give the floor to all actors and in particular the population. The fair enabled the water stakeholders to raise awareness on the effective implementation of the six SDGs - in particular the target of effective water resources management, to promote a sustainable production and consumption of water, to reconsider traditional management practices in order to deliver more sustainable water and sanitation services to the population and to make the eastern region more resilient to climate change. 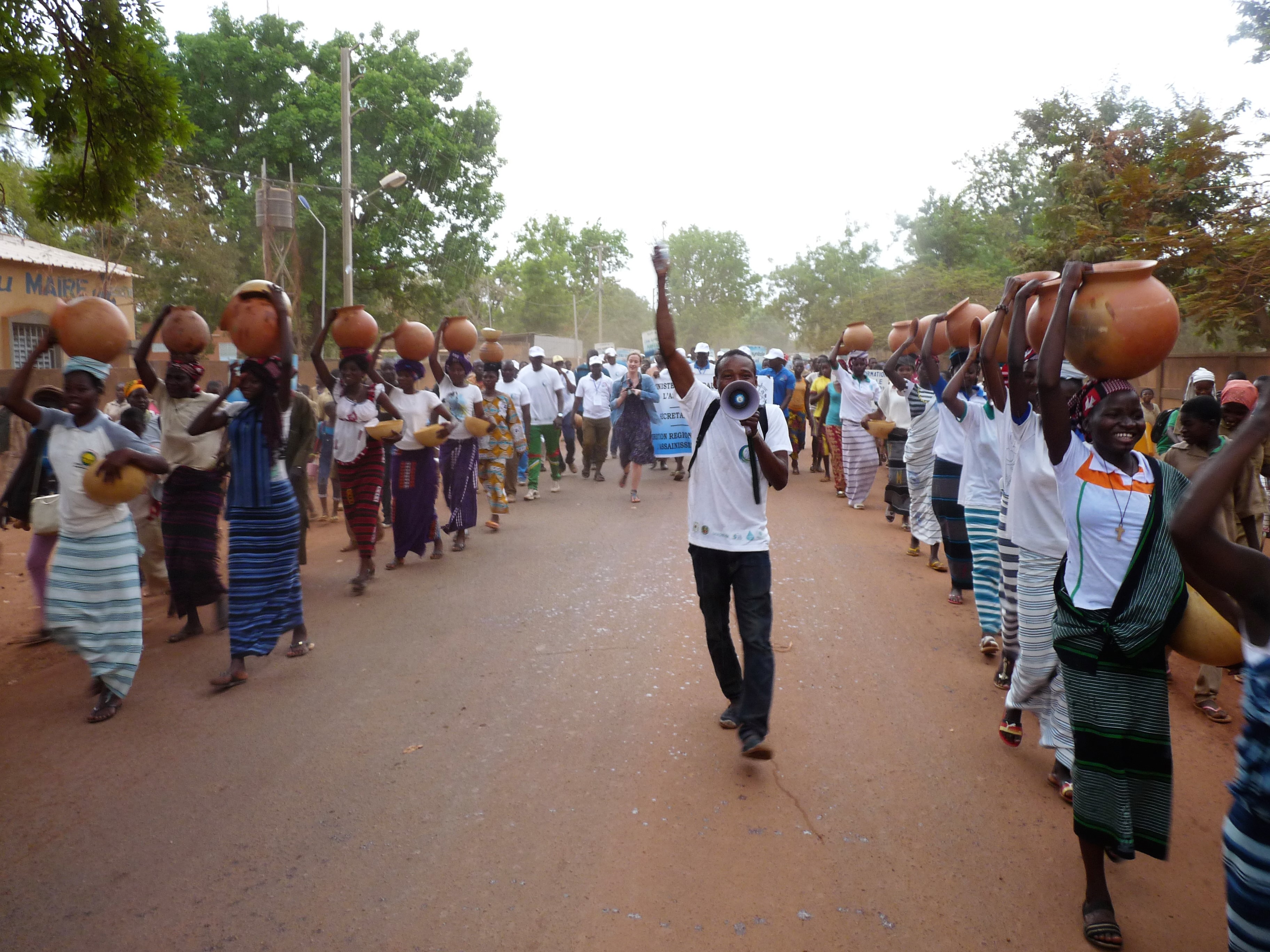